Barbaric! is the latest release from Stellagama Publishing and builds on their Sword of Cepheus 2D6 role playing game. A few weeks ago the author Omer Golan-Joel invited people over on MeWe to participate in the playtest, to which I jumped at the chance to take part in. The playtest went through around four updates in a matter of a few weeks before final release. The book contains 57 pages and is available on Drivethru RPG for $2.99 (normally $3.99) in PDF format and $5.99 for a print on demand book; it is also available from Lulu.com for $5.99.

The book is a set of fantasy gaming rules using the 2D6 mechanic for resolving dice rolls, based around the Cepheus Engine SRD. As mentioned earlier, it builds on the Sword of Cepheus (SoC) gaming rule set and on first impression, it appears that the rules are a reduced subset of the SoC rules in a similar approach to Stellagama Publishing’s Cepheus Light / Cepheus faster Than Light / Cepheus Atom / Cepheus Quantum SFRPG rules. Instead of simply taking the SoC rules and using exactly the same ‘generic’ approach, the author has styled a background which is akin to the Conan / Red Sonja / The Sword and the Sorcerer films ie. high adventure, pulp stories, plenty of action fighting fantastic beasts and evil sorcerers.

The book starts with a single-page introductory background and dives into the basic rules and character generation process. Chargen is a pretty easy and the six steps are described in a half a page, though all the elements to fully create a character require five pages. You also have the choice of playing a non-human, each of which have advantageous abilities. Traits are also included; you get to pick one over a two-page list, for example ‘Berserker’ where you have advantageous DM’s in combat, ‘Passing without a Trace’ where you can’t be tracked or ‘Thief’ where you have an improved chance of stealing items. Traits allow you to roll three dice instead of two and pick the two highest scores in a difficulty check.

Combat Moves are described in a couple of pages; this is where if you have a particularly high combat skill level, you can pick a specialism in a Combat Move. For example, if you have Combat-2 you can pick from ‘Archery’, ‘Armoured Combat’, ‘Polearms’, ‘Single Weapon’, ‘Throwing Weapon’, ‘Two-Handed Weapon’ or ‘Weapon and Shield’ all of which offer advantageous DM’s in combat. A number of Combat Moves are covered up to level 5 skill.

In keeping with the ‘heroic’ style of play, Barbaric! gives each player a number of ‘Hero Points’ which can be used to reroll certain dice throws, in order to get a better result. Hero Points can be earned by exceeding skill or characteristic scores by a certain number which when earned, feed back in to the group Hero Point pool. Its a nice system and reminds me of the (going old school here) Warhammer Fantasy Role Play ‘fate Points’ system where you could ‘dodge’ a catastrophic situation by expending a fate point. Barbaric!’s similar system is a little more freely available to use and can be replenished a lot faster. This helps to emphasise the fantastic actions and feats that players are more likely to attempt and succeed at.

Equipment is described over four pages, in keeping with a quick set up for play, armour is limited to four items and there are only 13 choices of weapons, three of which are variations of unarmed weapons (see the Critical Hits below). There is a bit of white space left at the bottom of the page, personally I think there could have been scope to include a few more weapons (I always like lots to choose from). However, its only now that I have spotted an omission which I should have picked up in the playtest. Polearms are mentioned as a speciality as a Combat Move (skill level 2) but there aren’t any Halbards, Pikes, Scythes or Poleaxes (to mention a few) listed in the weapons table, only variations of spears. Perhaps these could be included in the next update Omer? General equipment is covered pretty comprehensively with a full range of kit to choose from.

Combat is pretty detailed spread over five pages, which I think is fair as fighting of some such or another is going to be a big part of any Barbaric! game. There is a nice clear process to follow and if you are unfortunate enough to suffer a damaging blow, there are three tables of Critical Hits according to what type of damage received ie. slashing, crushing or piercing. Again reflecting the Conan-esq style of play, there are some pretty gruesome wounds described; ‘Eye Removed’, ‘Lung Pierced’ or ‘Shoulder Crushed’ sound positively lovely. The next three pages cover Exploration, travelling, underground movement and survival.

Sorcery! is the next major section, describing the Barbaric! magic system. The system follows the Sword of Cepheus ‘magic is bloody dangerous’ format in that casting any spell, involves an element of risk. Spells require a successful dice roll to cast, influenced by a number of factors which can increase or decrease the chance of success. If the spell goes wrong, you roll on the ‘Spellcasting Mishaps’ D66 table. Some of the effects can be reversed, some involve unwanted visitors – just hope you don’t roll a 66 though…! The range of spells is good, with a D66 table listing them if you also wanted to randomise them. All the usual suspects are here with attack, curing, control and defense spells available. 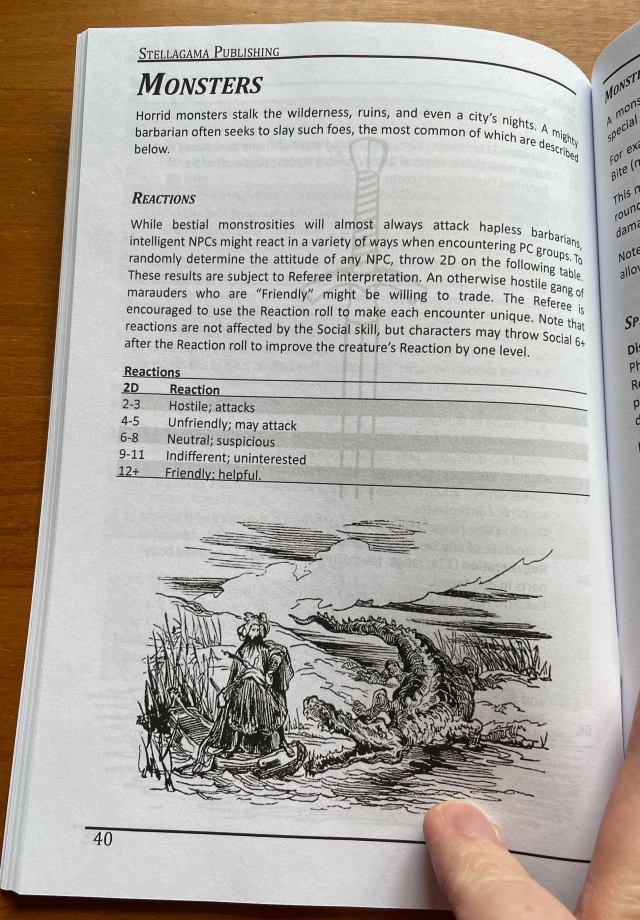 Page 40 dips into who are you going fight; the Monsters! section introduces your potential opponents by looking at how they may react to you. The ‘Monster Format’ describes how to read a creatures statistics and what special abilities they may have. The author has provided plenty of sword fodder sorry I mean challenging opponents (!) with creatures ranging from all sorts of lizards, undead, goo, Dinosaurs, mammals and insects for a referee to throw at the players. The sixth page following this section lists a number of common NPCs that the party may encounter such as soldiers, nobles, merchants or peasants.

The final section in the book is what most adventurers crave – Treasure! There is quite a bit of detail dedicated to this section, with tables to determine size of hoard, potion, spell book, armour, weapon or ‘misc’ items. The latter is presented with a D66 list with everything (barring a magical kitchen sink) including wands, weapons, armour, brooms (!), rings and just about anything else that can be enchanted.

I took the opportunity to pick up a copy of the print on demand (PoD) version of the book on release, when it was initially made available through Drivethru RPG. Ten out of ten for the turnaround from Lightning Source in Milton Keynes; average delivery time for my previous PoD orders has been eight days, Barbaric! arrived in five which is excellent. It is presented in A5 format with a glossy black front and back cover. Where there is an illustration on the other side of the page, there is a slight impression left in the background of the page you are looking at (see example below). To be honest, this is no different to any other PoD book I’ve ordered from DTRPG and doesn’t really detract from the overall enjoyment of the book. Its a handy format book to carry with you if you are heading to friends for an evenings play. Besides being available on DTRPG, a print version is also available on Lulu.com, via this link.

That zombie is trying to break through the back of the page if you look hard enough…!

The book is well laid out with easy-to-read text and only a faint broadsword watermark in the background to each page. There are a number of monochrome illustrations dotted throughout the book, including some really nice full page scenes. 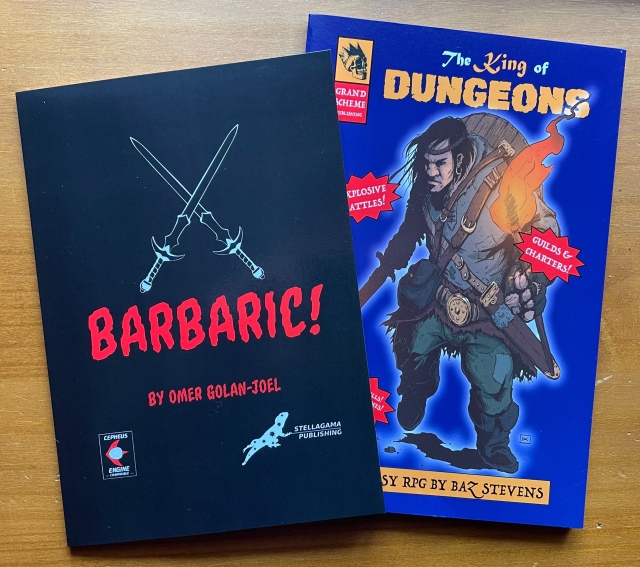 In some ways, Barbaric! reminds me a bit of Baz Steven’s ‘The King of Dungeons’, though the latter has a more specific and defined background to support its premise. This isn’t to detract anything from Barbaric!, KoD may offer a more in depth style of gameplay which supports longer term campaigns, Barbaric! fits quite neatly into the short session format with a quicker character generation process and simpler gameplay style. There isn’t as much developed background in Barbaric! as KoD, but the text keeps this running theme of high adventure. Barbaric! is ideal if you want to play adventures similar to the Conan films; one shot nightly games or something played out over a few sessions where the emphasis is on fun and adventure (and large amounts of beer and pizza!) I would highly recommend Barbaric! if you are looking for a hack ‘n slash style game that you can easy jump into for some quick start adventuring. I would like to thank the author Omer Golan-Joel for kindly sending me a final version of Barbaric! to review.