Its been about seven weeks since my last post, just at the start of the lockdown here in the UK. I’m lucky enough to be in the position of having to work from home and not being furloughed, something which does not seem to be changing for the forseeable future despite the UK Governments change in advice for England. Though I’ve been at home (as I should be), to be honest I’ve struggled with motivation to write anything, having found the whole stay-at-home thing completely exhausting. I’ve tried to find out a bit more about this ‘condition’ as it seems that a number of people have reported the same thing. Apparently its called ‘allostatic load’, the wear and tear on our bodies from being in a constant state of stress response. To try and counteract this, I’m resolving to try and stay off Twitter and keep away from the news which is obviously dominated by the coronavirus pandemic.

To restart writing, I’m going to start small with quick articles which I hope will get me back into the mood of writing regularly again. I’ve got a huge review pile to work through so this will be a good lead-in to get cracking on those.

There have been some interesting releases in the past few weeks, one of which is a new fanzine for Classic Traveller (CT), in a collaboration between Omer Golan-Joel of Stellagama Publishing and Paul Elliot of Zozer Games. Called ‘Darkest Stars’, its a free-to-download PDF from the Darkest Stars website: 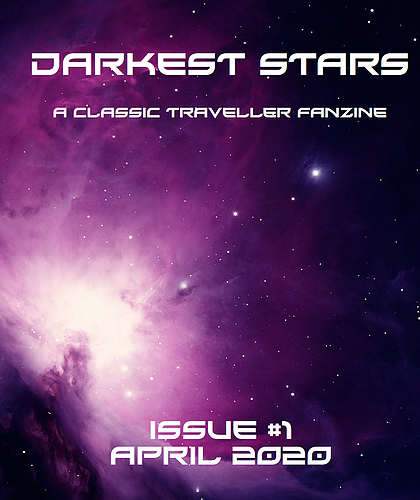 Darkest Stars describes itself as a ‘Proto-Traveller’ fanzine; its scope is the three LBB’s, the Mercenary supplement, Supplements 1-4 and the first four adventures. Its aim is to focus on games that players characters can influence a wider context and not too much paperwork to bog things down with.

The PDF contains 20 pages describing several articles including a setting based loosly on the old GDW game ‘Dark Nebula’. Omer has created the basis of a CT ‘small’ setting at the start of the ‘Long Night’ (2900CE) across two subsectors with Aslan and Solomani protagonists. Omer sets this up with eight pages of text and maps describing the historical background to how the Dark Nebula exists and the current level of antagonism between the Aslan and the Solomani Confederation. The text is engaging and was surprised when I reached the end of the article that there wasn’t more!

The rest of the fanzine contains a number of rules articles to try and fill in where CT’s rules don’t work as well as they could. Namely:-

‘Kill it with Fire – Flame Weapons for Classic Traveller’ by Omer Golan-Joel looks at types of flame weapons ranging from Molotov Cocktails to types of military flame throwers, along with their game characteristics and weapons matrix.

The last article ‘Quick and Dirty Classic Traveller Vehicle Combat’ by Omer Golan-Joel is a look at streamlining the vehicle combat rules in CT, taking inspiration from Book 2 and DA2.

Darkest Stars is a really high-quality fanzine produced to the same production ‘look and feel’ as other Stellagama Publishings products. There are some useful and interesting articles and I’m certainly looking forward to seeing more from the ‘Dark Nebula’ setting Omer has created.

Signal GK is Back!

The Zhodani Base has also been able to host the lost Signal GK online resources, which include for Classic Traveller: a character generator (using Book 1 or 4 rules), a subsector generator and various TAS forms. Good to see this online again – thanks to BeRKA over at the Zhodani Base!

The Signal GK online tools can be found at:

Finally if you are looking for more reading material, the latest issue (May / June 2020) of Freelance Traveller is available for download:-

Some new products which are now available to purchase from DriveThru RPG:-

Also out for the ‘Clement Sector’ setting, is Subsector Sourcebook: Earth

Stellagama Publishing has released Non-Humans for The Sword of Cepheus RPG.

Looking ahead, Free League Publishing is looking to release a fourth edition of the Twilight: 2000 RPG, endorsed by GDW/FFE’s Marc Miller. This will be a Kickstarter release in August for publishing in early 2021. For further information, take a look at this news release.

In the meantime, you can download a couple of Twilight: 2000 fanzines by GDW/FFE from DTRPG called ‘You’re on your own’:

Hopefully there is some inspiration and something to tempt your wallet above. In the meantime, whatever you are doing stay safe and look after yourselves!