Posted on March 7, 2020 by AlegisDownport

I’ve written about Laserburn, the Tabletop Games (TTG) miniatures skirmish gaming rules several times on this blog in some form or another. Though I’ve owned the rules and a couple of the supplements for a good many years (well, since the mid-eighties) the scenarios mentioned in the original rules have remained elusive and there is very little information available on the internet about them. Occasionally copies would come up on eBay, but so rarely you’d have better luck getting a win on the national lottery.

However, one day in December 2019 my luck changed and an email alert popped up for something to do with Laserburn, on sale on eBay. I quickly checked the link out and couldn’t believe that it was the holy grail of the Laserburn scenarios; all four published scenarios plus a copy of the original rules. Bets of all it had a ‘buy it now’ price whilst wasn’t too outrageous. 90 minutes after the listing went live, I’d placed the order and secured the listing.

A few days later a large envelope appeared in the post and there they were, the Laserburn scenarios that I’d for so long tried to track down. So what did I get exactly?

All are in excellent condition condition considering their age, which includes the extra copy of the rules and reference cards. As I’d also managed to pick up a copy of the solo adventure ‘Scavenger’ some months beforehand, I’m going to put together a series of features on these scenarios to help fill in gaps on the background of these products, the first of which is:

Originally written by Richard Edwards, it features a large yellow card cover and back along with a players guide and referees guide in A5 format. The card cover (in A4 size) and back feature layout maps of three levels of the building where the heist is taking place, including the ground, roof and apartment. The players guide describes the set up to the game:

You’ve got yourself into a situation where you owe an inordinately large amount of cash to one of the bigwigs of the megacities local crime syndicate. As you don’t have the means to pay him back, you will have to perform a little ‘job’ for him instead. This will involve kidnapping a drug dealer from a luxury condo and deliver them, preferably alive, to the syndicate bigwig by getting to the roof of the condo. Specialised (illegal) kit is used to disrupt communications in and out of the building and help aid the heist.

You have the choice of using your own characters, or you can use the pre-generated characters (where there are four provided). You get the usual Laserburn stats (Weapon Skill, Combat Skill, Initiative, Skills) and what equipment you have available. In addition, there are game stats for six henchmen of the crime syndicate who will be going along to make sure that you do the job as asked… or else! Compared to the stats of the pre-gen characters, these are ‘Elite’ status characters so you don’t want to get on the wrong side of them! In addition to what weaponry each character has on them, there are also upto 20 grenades (non-destructive) available (such as gas, smoke or concussion). Tactics are basically locate the target, get to the roof and don’t stick around! 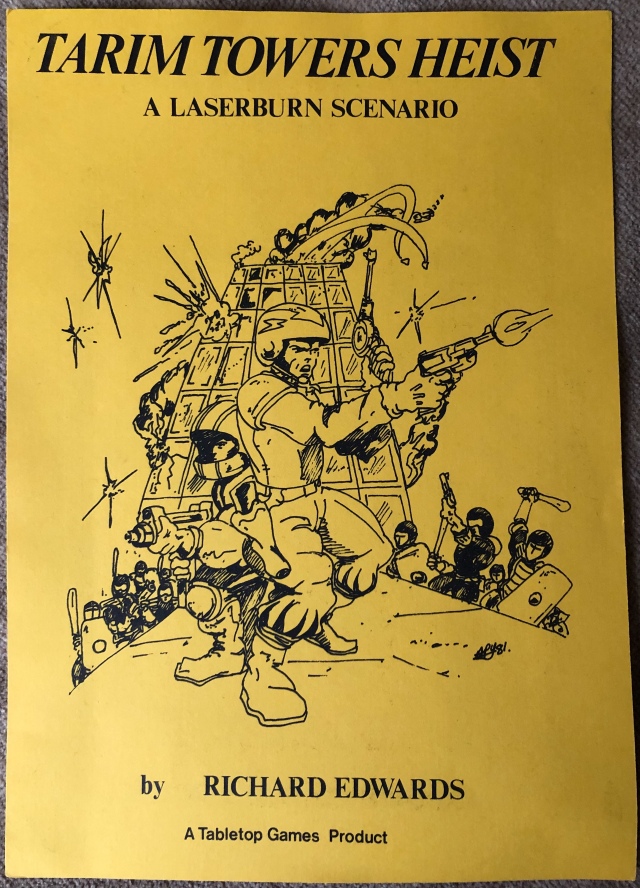 The referee’s set up is provided from the eight-page booklet; though there are only three layout plans provided, the apartment level is used repeatedly after the referee determines the number of floors on a roll of D6+2 plus 10. The defenders are listed in turn, which comprises of four high-level veteran / elite status opponents and two groups of four guards, armed in various ways.

The next set of instructions for the referee detail what the players can find when moving through the building. Vidphones and terminals can be accessed by someone with Computer skill (which is described in the book as an additional skill). Doors (which are the iris valve type) can be breached in a variety of ways, some of which are more subtle than others. Lifts which are indicated by the circular tubes at each corner of the building, are transparent armourplate so even if you use them instead of the stairs, it will take an opponent number of hits to penetrate. As the players work their way through the apartments they will have to deal with the occupants; however apartments also mean opportunities to steal valuables and the chance to try and make a profit out the whole venture. Morally, this is extremely dubious but this is the world of Laserburn after all; you get a couple of tables with the tenant types and contents (jewellery, furs, paintings, credit cards etc) so the players will have to work out a way to get this lot past the occupants and guards. There are actually three people with the same initials as the target the players need to kidnap and the referees guide provides some guidance where these may be found.

Laserburn has always been big on equipment, especially weapons and Tarim Towers Heist doesn’t disappoint. One and a half pages of kit is listed (including ladders…!) with a full paragraph description for each item. The last couple of pages include a (repeat) map of the building layout and a table of what happens afterwards, with a number of points awarded to the players according to the number of results they are able to achieve.

The scenario is dated November 1981, which makes it (at time of writing), just over 38 years old. Illustrations are credited to Tony Yates and are all in the same style as the rest of the Laserburn books, though there is one illustration credited to ‘G. G. Dixon’ and this captures the styles of Tony Yates perfectly. Don’t expect huge amounts of backstory or lavish illustrations; Laserburn is about action, equipment and players diving into the scenario and causing as much mayhem as possible, for which Tarim Towers Heist delivers. Would the players achieve their objective? I think they have a reasonable chance, depending on how the referee deploys their forces which are limited in number but the tower occupants may have something to say about that! The players had better achieve their objective, otherwise Big Mac Holden is going to be coming after them…

Musings on the Traveller RPG world, technology, astronomy and digital art.
View all posts by AlegisDownport →
This entry was posted in Laserburn, scenario and tagged Laserburn, scenario, Tarim Towers Heist. Bookmark the permalink.