Round up of 2019 and Knox-class Frigate Review

Posted on December 27, 2019 by AlegisDownport

I usually post several articles in December especially in the run-up to Christmas, however the past few weeks has been especially hard to think about RPGs and gaming; my wife has some health issues which have come to the fore and all my time has been devoted to looking after her and helping her work through things. Now that she has started some treatment, I’m hoping that her steady (but slow) recovery will continue and 2020 will look a bit brighter for us.

So, in the meantime I’m going to post what articles and updates when I can; I’m going to start with a quick summary of the latest news and releases:-

Biggest change on the publishing scene is that Gypsy Knights Games changed their name to Independence Games at the start of December; the website is still currently linked to GKG’s domain name, but I expect that this will gradually change over time. From John Watts’s announcement on MeWe (to quote): ‘There have been several reasons for this change. First and foremost is that I’ve been dissatisfied with the name for a few years now and I didn’t feel that it properly portrayed my company and what it was doing. I feel that Independence Games does a better job of giving the right impression and this is the primary reason that the change is being made’. I can see where John is coming from, especially as he has gone full-time publishing RPG materials; the new logo has a professional touch to it so I hope it will serve him well. 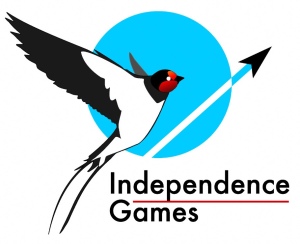 The Clement Sector and Action Movie Physics products will still be available (and developed), the only thing that is being changed is the name and colour scheme. I’ve seen GKG develop as a publisher since 2011 (John was one of the first publishers to send products for review and in some ways support this blog) so I think this is great to see this ‘evolution’ of GKG as a publisher and look forward to seeing new products being released. My best wishes to IG and every success for the future!

Talking of new products, probably the most exciting and interesting new development to come out of Independence Games is the development of the Earth Sector background, following on from the Clement Sector. I have been wondering for a while how the Clement Sector products were going to expand beyond what has already been published. There is a huge amount of material for the Clement Sector and it was starting to feel that it was reaching ‘saturation point’ in the development of the material. The products are of a consistently good quality and the writing team at GKG (sorry, Independence Games) have come up with a number of interesting and useful publications. However there is a finite point where you can extract such useful material, especially with the Clement Sector’s fixed boundaries, so its good to see IG exploring this background (set in 2350, eight years on from the Clement Sector) and all the opportunities it brings. The Earth Sector sourcebook is slated for release in February with a number of products being released from the beginning of January, with first product released under the ‘Earth Sector’ moniker is the Knox-class Frigate, reviewed below. 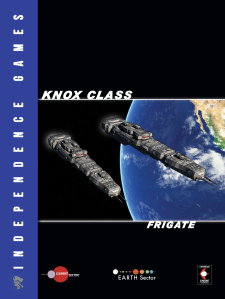 However before I get to the review, there are a few other bits of news I want to cover:-

Stellagama Publishing have released ‘Liberty Ship’, a supplement for their Cepheus Engine-based background ‘These Stars Are Ours’. The ship is (in its base form) a merchant spacecraft but the book includes four other variants. Available from DTRPG for $3.99 (normal price $5.00). Currently in production is ‘Sword of Cepheus’, a set of rules based on the Cepheus Engine SRD but for a fantasy environment. I’m really looking forward to seeing this as I’ll be interested to see how the rules have converted, when compared to my own Cepheus Engine conversion. In addition, Stellagama also has a ‘UFO’s’ supplement to follow Sword of Cepheus; I assume that there will be a number of links and references to their TSAO background in this book.

The latest issue of Freelance Traveller features amongst many other interesting and useful articles, a review of Gypsy Knights Games adventure ‘Save Our Ship‘, from the ‘Cascadia Adventures’ series, for which I provided some artwork and deck plans for the Rucker-class starship.

When I’ve had a few moments, I have been able to bag a couple of purchases;

Mongoose Traveller Companion: this was reduced during DTRPG’s ‘Black Friday’ sale so I bought a copy on PDF, only because it was cheap and might provide some useful ideas.

I missed out on a couple of eBay sales of TTG’s Laserburn supplements and scenario’s a couple of months ago, being outbid at the last minute. However I managed to win a sale which comprised of the ‘holy grail’ of four Laserburn scenarios and a spare copy of the rules, for thirty quid; Tarim Towers Heist, Sea Prison Siege, Assault on Bunker 17 and Sewerville Shootout – as far as I know, the only four officially published Laserburn Scenarios (along with the solo adventure ‘Scavenger), so I am immensely pleased to obtain these. I intend to write a couple of articles about these in the future. 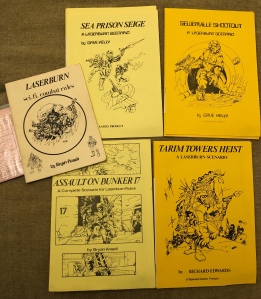 Moving onto the review; the Knox-class Frigate from Independence Games. This is available now from DriveThru RPG for $4.99, containing 30 pages. It weighs in at a hefty 68Mb for the PDF, authored by Michael Johnson and art by Ian Stead. The book opens with a summary of the ship’s specifications and a discussion on the history of the Frigate as a ship class, followed by the background and development of the Knox-class. The ship is 1000dTon in size, capable of a 2 parsec Zimm drive jump and is operated by the United States Space Navy (USSN), Boone Space Defense Force (USSN) and the Sophronius System Navy (SSN) in both the Earth and Clement Sectors. A number of these were left in the Clement Sector when the wormhole collapsed; this prompted the USSN to construct a number of (improved) Knox-class vessels. There are two lists of the ship names which are (or were) in commission in both sectors of space, along with the ships pennant number and registered base.

Page 8 starts to detail the specification in a lot more detail with a location map of the ships turrets and launchers. Each deck (of which the ship has four) has a ship description along with the ship’s Launches. Pages 11-12 contain the specifications for the ships Fast Launch with 13-14 specs for the Ship’s Boat. Over the next three pages you are presented with various isometric views or scenes of the Frigate, which neatly leads onto (after a single page with the ships game statistic specifications) the deck plans – of which there are a lot! I think the best way to describe the deck plans would be that you have each of the four decks displayed in full length. Though its good to see these in context, they need quite a high level of magnification to display the contents of each room or part of the ship. However, to overcome this shortcoming you also get half a deck per page which makes the deck plans much more usable. The last three pages of the book cover the ‘improved’ Knox-class Frigate with a game statistics page and two pages of deck plans.

Though the book is a bit lighter (when compared to other GKG releases) that usual on descriptive content, you get a a big ship with plenty of illustrations for your $4.99, which I think is pretty reasonable. Despite the largish file size, I found no problems with the speed of loading of the book on my iPad Pro (2016 model). A decent solid first release under the Independence Games label – I look forward to more releases and seeing more about the Earth Sector!

This will be my last blog post for the year, so however you intend to celebrate the arrival of the New Year, thank you for your support and may you and your family have a very happy 2020!