Posted on July 6, 2019 by AlegisDownport

Its been a few weeks since I wrote a blog post, I’m now into week five of my new job and I’m thoroughly enjoying it. There is a huge amount to learn including various regulations and publications so its taking up quite a bit of time during evenings and weekends. I’m also booked on a certification exam in September so I’ve got some revising to do! However its setting me up for what is a new career path so its worth putting in the effort. It does mean that the blog won’t see quite as many posts as last year due to balancing time with the new job and the exam. I did get upto quite a rate of posts on the blog at one point last year, especially in August. However this year will be a bit quieter so I’m going to focus most of my posts on reviews and new releases, especially for Cepheus Engine and related products.

Talking of which, ‘Long Road to Redemption’ is the latest publication from Gypsy Knights Games. Though GKG publishes a substantial number of supplements and sourcebooks, there aren’t a huge number of adventures in comparison for its Clement Sector background so its always nice to see a new adventure published. The book is available from DriveThruRPG and costs $9.99 for the PDF, $22.99 for the softcover colour book and the same for the combined PDF/book. The book has 68 pages is written by John and Wendy Watts. As part of the package, you also get separate PDF handouts for the pre-gen characters included in the book. 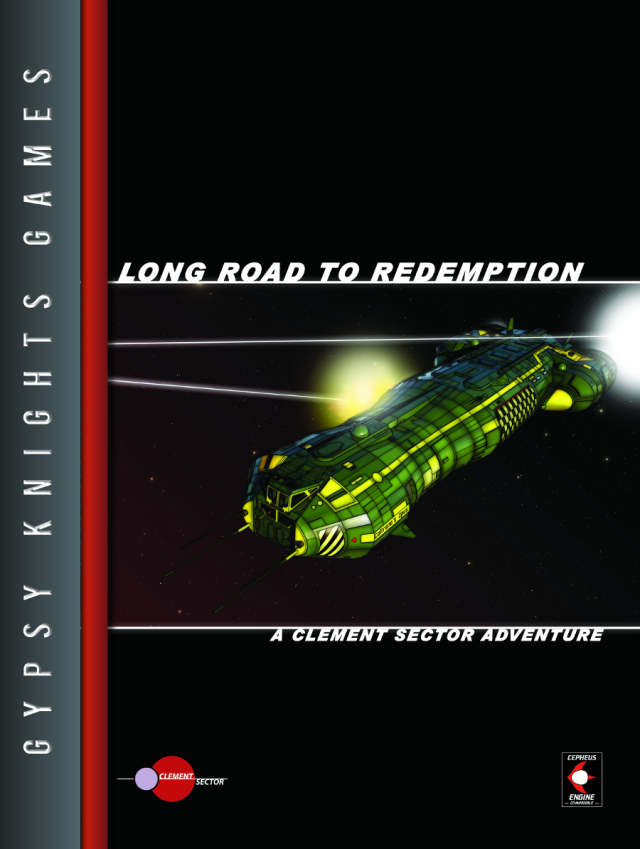 The adventure is structured into four major parts;

2. The first half of the adventure ‘The Doll Run’.

3. The second half of the adventure ‘Dashwood and a New Adventure’.

The adventure’s two halves can be played in either order or by omitting certain sections and though it is pretty free-format, there is some guidance and structure on how it should be played. Essential Scenes are what are required to move the story forward, Optional Scenes can be used at the discretion of the referee and Contact Scenes are moments which the players can ‘unlock’ by visiting certain personalities in the game.

You are provided with five pre-gen characters complete with colour artwork by Bradley Warnes, game stats and background. The crew also has a starship; ‘MV Contrane’s Opus’, a Lee-class merchant vessel to which are are supplied with ship stats and deck plans. The first part is rounded off with some crew general task descriptions and task resolutions for things like ‘Locating a Zimm Point’ or ‘Landing the Ship’.

Entitled ‘The Doll Run’, this can be played as a separate adventure entirely. The players are asked to transport a containment of bobblehead dolls from a toy manufacturer on Boone to Dashwood. The plot description goes into quite a bit of detail to help set the scene and cover quite a few possibilities as to what might happen in arranging the deal. Following this, the adventure sets up a few destination possibilities within the subsector (Fiume, Chriseda, Bowemiwak, Dade, Osiris, Arnemuiden, Dashwood; each planet has a unique set of encounters which include the three types of scenes previously mentioned. These help to establish the background plot for the Arrival on Pisgah where most of the action is focused on. Quite a bit of thought has gone into working out many of the possible choices that the players may take, including where their next destination may lie. This is covered by the extensive number of travel points and how long it will take to complete a Zimm jump and interplanetary travel times using Zimm drive and non-Zimm means to get where you want to go. Sometimes it felt a bit heavy going with the number of possible options described, but this does make it very easy for the referee and saves them from having to work out fuel consumtion, where to refuel etc so there is a great benefit there in keeping the game flowing.

‘Arrival at Pisgah’ is where the bulk of the action takes place and sets the players up with a rescue mission. However there is the opportunity to make some enemies here if they aren’t successful so my only advice to players who may be reading this is to make sure your ship (if not using the pre-gen Lee-class freighter) has ‘the right equipment’ to prolong a certain situation out…! The adventure rounds off with a decent punch up with the adventures main protagonists.

Describes the planet of Pisgah in the same format as all other GKG books with system details, physical data of the planet and a couple of maps. There are several pages of NPCs (though with no illustrations) and the final three pages detail a certain pirate group involved in the adventure.

Though the actual adventure itself isn’t world-shattering in what the players are expected to do, it is a good, solid set of encounters with a main phase that has a great deal of thought into describing what is going on and consideration into what possible options the players could take. I think this helps the referee out immensely by laying the groundwork to make the adventure easy to follow and minimises the work the referee has to do in-game. However I would recommend that the referee reads through the book thoroughly so they are familiar with all the options and choices that are available. It is extremely well-written and as usual with GKG products, contains a wealth of information and background that enhances what is already a very rich background in the Clement Sector. Along with the usual high-quality artwork from Ian Stead, Bradley Warnes, Joel Lovell, Michael Johnson, Jennifer Leonard and John Watts, this is another high-quality product from the GKG stables. Definitely worth checking out if you are currently exploring the Clement Sector and I hope to see some more adventures soon! I’d like to thank John Watts for kindly sending me a copy to review.