Posted on April 5, 2019 by AlegisDownport

Finally, spring and lighter mornings are returning to the UK at last. Though the first three months of the year haven’t been any near like last years poor weather, somehow it’s seemed harder to get motivated to write for the blog. However some time in the sun and fresh air has brought about a renewed attitude and a change in personal circumstances, which I mentioned in my last blog post. After twenty-five years, I’m finally moving on from working in front-line IT technical support and going into the field of information governance, having handed in my resignation with my current employer today. Its been a long time in coming but I’m finally getting to specialise in a field that has piqued my interest and I’ve been doing more and more work in the past eighteen months. I’ve thoroughly enjoyed working with my current employer, but its the right time in my career to move on into a subject that I’ve found interesting and challenging. However I’ve got a period of notice to work and a lot of work to do in the meantime, as I want to leave my current employer in the best possible position for the future.

A very long time overdue, I’m going to tackle the review pile, starting with ‘Artificial – Robots in Clement Sector’ by Gypsy Knights Games (which I’ll refer to as ARCS from now on).

Robots are obviously a huge part of many sci-fi stories and worlds and though its been a while in coming, GKG have put a lot of thought and consideration into ARCS. The book is available from Drivethru RPG for $9.99 as a PDF or $24.99 for the softcover book (hardcover is the same price at the moment, normally $34.99). The book is 100 pages long.

Compared to other books from the GKG stable, this could be considered one of their medium-weight supplements which is reflected in the price. The book has a very attractive cover by Bradley Warnes; you immediately get a good idea of how much detail there is in the book by the contents section, which is seven pages long.

The books core aim is to give players and referees the ability to ‘build’ robots by following a design checklist. Breaking the book down into its main sections:-

After the contents pages, you are introduced to the world of Clement Sector robots with three pages of background how robot technology has evolved from the twenty-first to twenty-third centuries.

The design process is summarised on page 13 with a clear and concise break down of how to build your robot. I’m not going to repeat the whole process here, but highlight the key parts. As you work your way through the design process, at the bottom of several pages you have a design example which helps to clarify the step. I’m always pleased to see this sort of thing as it always makes getting used to a new system / process a lot easier. 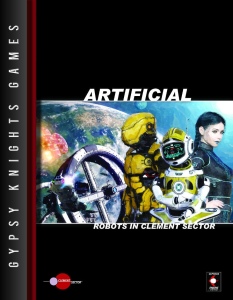 The chassis forms the base for all the components and parts of the robot; a variety of shapes and types are described, from basic frameworks to biosynths, the ultimate robot chassis in the Clement Sector. A biosynth is essentially a replication of the human body, almost completely to the point that muscular and certain nervous systems act in the same way. Chassis sizes range from 1kg all the way up to 20,000kg! A table lists the available space with which you can add components and its strength rating. You have a huge number of options available for the chassis such as additional armour, types of false skin and protection against radiation.

The power supply is the key component in deciding on what the robots duration and how much power will be needed to power its attached components. There is as much here in creating your type of power unit as there is building a spacecraft; there is plenty of information describing the type of power unit, recharge times and operating times.

Page 28 looks at extraneous appendages aka ‘arms’. Depending on what your robot will be used for you can choose from different types of armature such as ‘assembler’ (specialised attachments used for construction for example), ‘standard arms’ (human-like), or ‘tentacle’ (Cthulhu has had some design input). The section then follows with how to break the arm down into components such as having characteristic increases, branching (multiple arms from the arms chassis connection) or hydraulics.

Page 35 has a couple of pages on what ‘head’ options are available. A head could make the difference between how an organic life-form interacts with the robot, acting almost as a point of focus for communication, in the same way that two organic life forms would with each other. Ok, is it just me that find those headless Zhodani warbots a bit sinister?

Want your robot to get around? You’ll need some form of locomotion which is covered in the next six pages. You have quite a bit of choice in this area, ranging from air cushion and anti-grav, through to legs and wheels to water-based forms of propulsion (and a few others in between). Each form of propulsion has a table with its respective capabilities and costs, plus a brief description.

Part 6 (page 43) delves into types of armament, if you intend your robot to have offensive or defensive capabilities. Robots can carry weapons on integrated or external mountings and these are covered in the next four pages of the book. Note though; a biological synthetic can’t accommodate an internal weapons mounting, for obvious reasons…!

Page 47 looks at the one part that controls the robot – the computer. A number of factors influence the computer that is used in the robot which in turn effect game stats. There is quite a bit of information here giving you the choice of how much sophistication you want to put into the robot, balanced with how much money you have of course!

Page 53 (Software Programs) is a comprehensive section describing the programs that run in the robots computer. This isn’t just a list of autonomous commands, you have things like the ‘emotion emulator’ where you can give a robot the ability to express facial capabilities such as being happy, sad, surprised etc. I do like the table of ‘personality patterns’ where you can have the choice of ‘grumpy disposition’, ‘dull with a matter of fact attitude’ or ‘friendly and engaging’. Ideal for making a ‘Marvin the Paranoid Android’ robot character I think! The task software list contains software that is the equivalent of the usual skills that characters can gain, except that robots have to have sufficient core memory storage (ok, characters have to have this as well in some way, in the ‘old grey matter). There are some additional task software descriptions such as ‘cargo handling’ or ‘security’ or ‘valet’ which are specific to robots only.

A nice addition to what software programs are available for robots (and perhaps a reflection of modern technology and the way that we use applications) is the list of ‘apps’. These small programs are designed to perform a specific function and are much smaller than the regular programs. For example, you have ‘Jimmie’s 20 minute meals’; guaranteed pukka meals for your passengers with streaming narration and video (shoot me now or the robot, please). Or there is ‘mapfinder’; get the best maps for your local area/planet (useful) or ‘Yolanda’s Children’s Library’ (imagine a rogue robot blasting this out as it runs after you armed with lasers on a locked down transport ship). A very nice addition.

Section 9 includes all the types of sensors, communications and electronics you could ever want. Everything from visual, audio, taste and communications from civilian to military-class capabilities.

Section 10 (page 70) rounds up with ‘Other Components’, anything that isn’t already covered in the previous nine sections.

Sections 11 to 13 cover the game stats and how robots would ‘work’ within the Clement Sector rules. You also get a comprehensive section on attitudes to robots within the different subsectors; don’t assume that all robots are allowed within each planetary society. Some planets because or religious, cultural or historical reasons allow robots (or not) to varying degrees. This is especially useful if you intend to play a robot character, which neatly brings me to the following section on page 82. Its a useful and thought-provoking addition to look at the challenges when playing a robot character, some of which are similar when playing uplift or non-human characters. Its not a simple way to get a character with enhanced abilities by playing a robot, there a are great deal of disadvantages as well. The book rounds off with a number of design types, organisations and robot examples which are always useful to compare against when building your own robot.

So what do I think of ARCS? Its a thoroughly well researched book, presenting lots of options and components with which to build your robot, whether it be as an NPC, character or simply for an interesting encounter. It is lavishly illustrated with gorgeous colour artwork by Bradley Warnes, Stephanie McAlea, Tithi Luadthong and Kittipong Jirasukhanont. The author Michael Johnson has put together an excellent gaming resource for the Clement Sector (and Cepheus Engine) that is also an interesting read exploring the aspects of playing a robot character. Along with the usual high-quality editing and layout, this is another excellent product from Gypsy knights Games which I can highly recommend. I would like to thank John Watts for sending me a copy to review (and bearing with me so long in turning around a review!)