Posted on December 28, 2018 by AlegisDownport

Right, its time to do a three-pronged review of Cepheus Light, by Stellagama Publishing. I’m going to be taking a look at the PDF version, the printed book and the editable Microsoft Word document. The PDF and MS Word document are both available to download from DTRPG; both the PDF is available for a ‘pay-what-you-want’ cost, with a suggested price of $10, along with the MS Word version for the same suggested cost. The printed book can be purchased from Lulu.com (on-demand printers) for £15.10 currently, though I think it cost me a bit more just before Christmas, so the price is worth watching as there are sometimes discounts available.

Cepheus Light as the name suggests, is a cut-down version of the full Cepheus Engine rules set published by Samdarin Press. Omer Golan-Joel and Josh Peters have taken the core components of the CE rules and rewritten them as their interpretation (which is allowed under the CE System Reference Document and license). Why do this you may ask? There is an advantage in stripping out the core rules of CE and making only the core mechanics available in order to make a game more accessible, easier to set up adventures or enhance the main parts of the system. As a comparison, the original CE rules set is 207 pages long, whereas Cepheus Light (I’ll call it CL from now on) is 164 pages. At 80% of the original size, its not that much of a difference in page count; so what is the difference between the two? 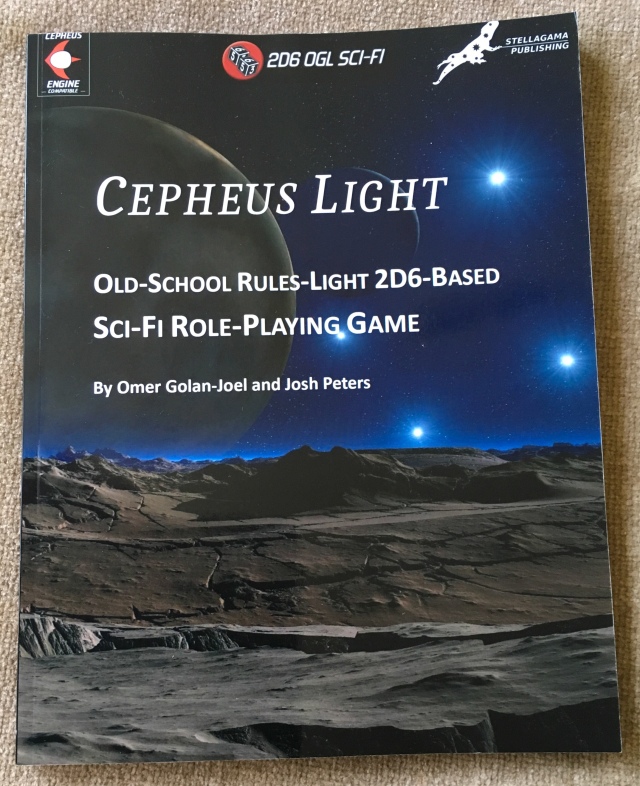 CL starts with a brief introduction about the book and the system including basic games mechanics. Very usefully, the PDF version has clickable links in the contents section, which helps navigation immensely. Page 9 kicks off with character generation and this is it becomes noticeable in the difference between CE and CL; the number of careers has been reduced from 24 down to 12, namely: Agent, Army, Belter, Colonist, Elite, Marine, Merchant, Navy, Pirate, Rogue, Scholar and Scout. The generation process follows the same familiar structure (survival, skills, promotion etc), but the authors have added six detailed examples of how to follow the creation process.

Skills are slightly different in that some have been amalgamated or altered slightly, but they are compatible with CE and skill levels work in exactly the same way.

Equipment has all the essentials and there is plenty to choose from, covering 22 pages including personal armour, weapons, kit and vehicles across a variety of tech levels.

Combat is broken down into the basic steps to follow, with additional detail on the different actions and attacks available such as using ranged weapons or hand-to-hand combat. Again, another nice touch is two detailed examples of combat, using characters from the previous section. This is spread out over eight pages where the authors set the scene, describe how each character places themselves in position and the actual combat rolls and resolution. Great stuff! You also get a section on vehicle combat, spread over five pages.

The section ‘Off-World Travel’ introduces interplanetary and interstellar travel. Another example of how the page count has been reduced is the table of typical interplanetary travel times; the table in CL is roughly half the size of CE, but still feels just as functional because instead of exact distances in kilometres, you’re given destination names such as ‘Small Gas giant to Jump Point’. Interstellar travel and running a starship is still just as bloody expensive (unfortunately though the page count is less in CL, you still have to pay off your starship for 40-odd years, sigh…) You can still play the ‘solo’ trading game in the same style as the original Classic Traveller rules, using the ‘Trade Goods’ table which has been transposed from the CE rules. The starship design rules still cover starships and small craft and the build process is clearly described. Pages 105 to 107 include an example of building a 300-ton TL10 Light Military Transport, which is followed by sixteen pages of example spacecraft most of which have some very nice colour illustrations. 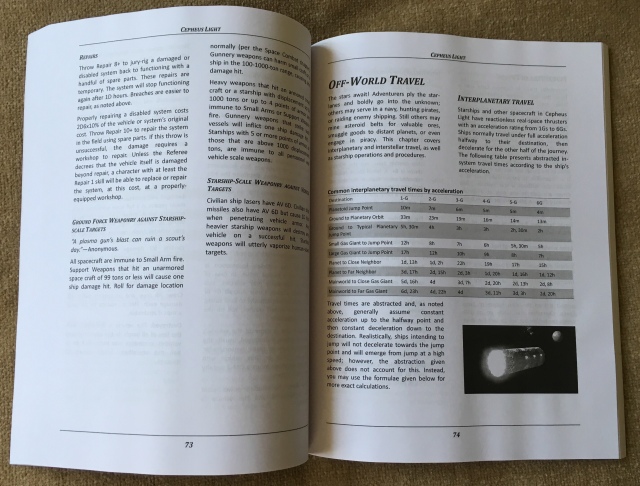 Space Combat is something that has divided some players, in that it has felt either overly complicated (those formulas in Classic Traveller…shudder) or overly simple. CL addresses this by describing the rules and actions available, backed up with a seven page example of a deadly space combat between a trader and a pirate.

Generating worlds feels like it has been shortened so that it feels like Classic Traveller again (Book 3), functional but not overly complicated and not to the level of detail as in Book 6: Scouts. I’m not sure and I haven’t tried it, but I wonder if you can get some of the weird results as in CT, where you can end up with an airless planet with a population in billions? Only way to find out is to try it… World generation is rounded off with a two page example.

Appendix A looks at Aliens and Psionics with a few examples of the types that could be encountered and the modified game stats (Greys, Reptiloids and Insectoids – a little bit of crossover from Stellagama’s ‘These Stars Are Ours’). Does anyone actually use Psionics in their games? Can’t say I ever have, but this section has been moved from near the front of the CE book to this appendix in CL.

Finally you have Appendix B which lists sources of inspiration, such as books, games and films. The main parts that appear to have either been moved around the book (a bit) or removed completely are chapters 13 onwards from the main CE book, namely ‘Planetary Wilderness Encounters’; there are no rules for animals. Social and starship encounters, some of the more detailed refereeing tips and ideas for adventure formats have also been removed.

There are plenty of illustrations in a mixture of colour and monochrome by a variety of artists which help to break up the text. I found the change in layout and size of font made the book much easier to read, which plenty of white space without it feeling like it was lacking in content. CE is a very detailed book and it covers a huge amount of material, but I found it hard going sometimes and it felt like there was a bit too much information to wade through. Cepheus Light extracts the key components and presents them in a clear, easy to understand manner. My favourite part? I love the examples which help to explain and apply the rules and because there are so many, this is what helps to bring up the page count to 80% of the CE book. The examples address what I have felt was a big shortfall in not just the CE book, but also Classic Traveller in helping you get up to speed with the rules. I find these useful as I have gaps of several months between remembering rules and they are a useful reminder! 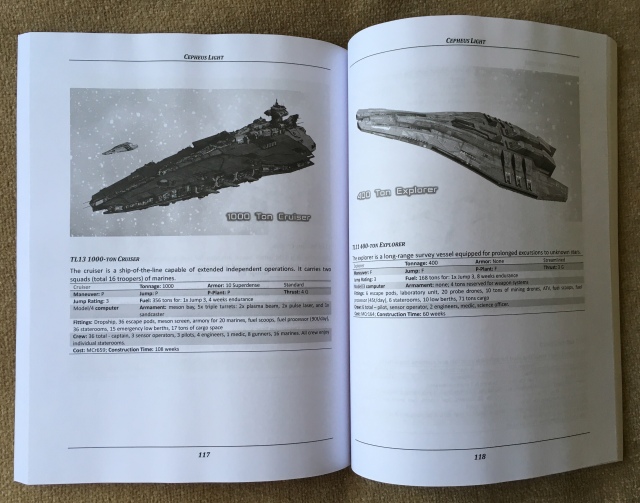 I also managed to get a copy of Cepheus Light in printed form, ordered from Lulu (and funded by my mon-in-law) as a Christmas present! The quality of the book is excellent and is presented in softback format, 210mm wide and 279mm tall, so it is slightly smaller than A4. You have a glossy card cover with matt white pages, text in black or grey for headings and monochrome or greyscale pictures. The only flaw I found in the reproduction was that the Cepheus Engine logo at the top of the cover was slightly cut-off; however the inside of the book shows correct spacing / no problems at all. Some of the images differ from the PDF version I guess so that the printed version would look better in greyscale.

I’m thoroughly impressed with the print book version of Cepheus Light, the authors have done an excellent job of producing the book and I’m impressed with Lulu.com’s final output. It took about 6-8 days from order to delivery, which I think is very reasonable.

This is available from DTRPG as a downloadable MS Word document file which can be fully edited; it is listed as pay-what-you-want, with a suggestion of $10. The file is roughly 300kb in size and retains all the colour editing and tables from the PDF version. All images have been removed, so you can use it as the basis for your own RPG rules. I think this is an excellent idea to make this available and would consider using it myself for a few ideas I have.

Overall, I really like Cepheus Light and think it hits the right balance between an introduction to 2D6 SFRPG games or you don’t want to read through all of the CE full rules set. I think this will be my ‘go-to’ modern gaming handbook for my own writing for now on – I highly recommend that you get a copy, I don’t think you will be disappointed! I would like to thank Omer Golan-Joel for very kindly sending me a copy in PDF format to review.