Laserburn as an RPG Part 1

I’ve been taking a look at the Laserburn rules set again and though the book is largely pitched at 15mm or 25mm miniatures skirmishes, it does mention that it could be used for role-playing. So I thought I’d take a break from Classic Traveller / Cepheus Engine products and take a look at how well you can roleplay using Laserburn. There are a couple if things I want to do to prove this (even if its just to myself!)

1. Create a ‘lite’ set of rules that cover the basic RPG mechanics.

2. Develop some sort of scenario that can be used with the above rules set.

The intention behind this is to adapt the rules in such a way that you can use it entirely without miniatures and set up a RPG scenario. I’m going to call these ‘house’ rules ‘Laserburn Lite’, the reasons of which I’ll describe below. 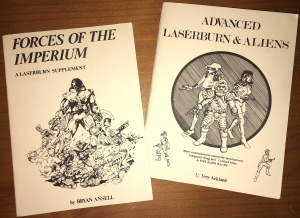 I’m going to take elements of the rules set from two books; the main ‘Laserburn’ (LB) rulebook and ‘Advanced Laserburn and Aliens’ (ALA). Keeping in with the spirit of Classic Traveller, it should be an easy system to pick up and run with. Going back through both these books, there are a great number of tables and some rules that seem to over-complicate a character generation process, for example. I have read that ‘Advanced Laserburn and Aliens’ isn’t that popular in the 15mm gaming circles, with the original rulebook being preferred. So let’s pull the best elements from the two rulebooks in a bit of a mashup!

Basic Laserburn has three combat-orientated stats, plus 14 (again combat-orientated) skills. Advanced Laserburn and Aliens (‘ALA’) expanded on this by introducing a number of ‘Character Capability Factors’ or ‘CCF’s’ which add some basic stats such as Strength, Endurance, Agility etc – the sort of thing that you would see in many other RPG systems. To me, the CCF generation process seems very complicated and overly ‘clunky’… perhaps I’ve been too used to simpler systems such as Classic Traveller or to a lesser extent, Cepheus Engine.

So how do I turn this into a workable RPG system then? The basic combat stats (WS, CS and I) stay and I’ll stick to the same generation process as in the basic rules. So depending on whether you want to generate a conscript, pirate or hero, that stays as the system I’m going to use. So to start we have:

Based on the table from the LB rulebook. I’ve reproduced the basic attributes table here.

The Advanced Laserburn and Aliens (aka ‘ALA’ from here) supplement is designed to provide additional rules for character generation. From what I understand reading other blogs, it doesn’t seem very popular. I can see why; it feels like a bit of a jumble of tables and slightly obscure rules. However there are some useful parts which I’ll use in my ‘lite’ rules here.

To get the total number of skills available for the character, roll a D6 and consult the chart:

To cover the basic sort if statistics that you would need to ‘flesh out’ a character and provide the additional stats you would use to base stat checks / saving rolls etc, I’m going to simplify the CCF system.

Out of the ones listed in ALA, I’m going to use these as a basis of gaving a ‘rounded’ set of character statistics:

The way I’m envisioning that these stats will work is to simply roll a D6 against the characteristic and get equal to or less, modified by DM’s. So a bit like Classic Traveller then…! Having just a D6 (instead of 2D6) though might make such skill checks easier… or harder, so I’ll try this out in the adventure.

The basic rules list of skills are entirely combat-orientated; ALA seeks to address this my adding a wider variety of skills, so I’m going to use the ALA chart for choosing them as this does the job quite nicely. Something I’d like to mention is that Laserburn skills aren’t like Classic Traveller, they generally just allow you to do certain things but with no dice roll checks for success / failure. This takes a bit of getting used to after being used to the CT skills system.

So, lets roll up a character;

Rolling for the CCF’s, we get:-

For number if skill, I rolled a 3 and got 1 skill to roll for.

Now to roll for the number of standard skills based on the ALA table. I rolled an 88, so roll again on the second table, and I get the Vehicular skill.

I want to give the character some starting cash so that they can buy some kit, a bit like the Tunnels and Trolls character generation process (one of my favourites). Therefore I’m going to add this into the CharGen process:

The table in the LB handbook gives prices and availability; I think if you choose the item you wish to purchase, roll on a D100 to see if its available, if so you pays your money and you takes your choice. If you miss the roll, it simply isn’t available and you will have to pick something else. That introduces a random element to determine what the character has picked up over the years.

I rolled 180 credits, so looking at the shopping list I can afford:

…which isn’t going to get me very far. So I’ll add +5 to all the rolls, which now gives me 230 credits. So back to the shops and successful rolls award me with:

Oddly enough I couldn’t see any cost for assault rifle ammo, so I’ll just ignore that for the moment.

So, now I’ve got a character, I’ll come up with a scenario that I can run in a sort of solo-RPG game to test the character stats and how they stack up as a set of mechanics. That second part is available to view here – Laserburn as an RPG Part 2.

Out of interest, the Penultimate Blog has a little bit of history about Laserburn (and also comments about its use as an RPG) if you want to learn more.

2 Responses to Laserburn as an RPG Part 1