50 Wonders of the Reticulan Empire Review

I can’t believe it’s aleady the summer holidays here in the UK, so what better way to start it with a bit of RPG reading? As per my last-but-one post ‘These Stars Are Ours Primer Review‘, I’m going to take a look at Stellagama’s latest supplement for ‘These Stars Are Ours‘ (TSAO) ‘50 Wonders of the Reticulan Empire‘. Available from Drivethru RPG for $3.99 (currently reduced to $2.99 at time of writing), it contains 30 pages and is currently only available as a PDF. The book is compatible with the Cepheus Engine (CE) rule book.

The book covers as the books title suggests, 50 advanced pieces of technology or aspects of life that could be considered as ‘wonders’ by a less advanced species. These aren’t just a range of weapons that could aid your typical adventuring party, the book has a wide range of items but also non-items such as ways of potentially surviving critical medical situations, or the psionic powers of the Reticulans. 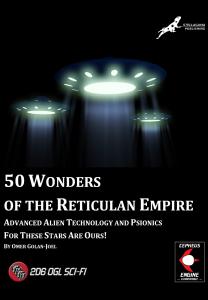 The book follows the same style as other Stellagama publications in that the book is fairly artwork-light, say in comparison to many Gypsy Knights Publications. There is nothing wrong with that; though you get a lot of text on each page, I didn’t find the descriptions heavy-going at all and are very well written.

The book is 30 pages long which includes cover, contents and open game license. The book starts with a three page introduction and setting overview describing the races that inhabit the sector and how the background came to where it is at the moment, in the year 2260. Following that, you have five pages giving you an overview of the Reticulan technology and describing how to aquire such wonderous tech (rated at TL13). This is a useful section; it sets up the environment and what can potentially happen when using items – it shouldn’t be easy to come upon such tech. Depending on what part of the Empire and races you aquire items from, you get varying potential results – ranging from no ill effects and everything working as intended, to the whole thing blowing up in your face.

Page eleven starts with the ‘Weaponry’ section; eight items are described ranging from hand weaponry to probably my favourite in the whole book; the ‘Grav Launcher’, which is basically a floating, controlled plasma bomb which can be detonated on command. Think of a high-tech ‘fireball’ and you’ll have a good idea of what this thing can do.

The next section is ‘Armour and Clothing’ which is just a single page, detailing three items of hi-tech clothing that provides either a form of stealth capability or protection. Though just a single page, there is plenty of detail and tables on how to use the items.

The next two pages cover ‘Gadgets’, which are mainly variants of portable laboratories or body / medical scanners. Though they are variants, there is something to fill every need or requirement. Another of my favourites is the ‘Microfusion Battery’ – a rechargable battery which can be refilled from a starships fuel tanks and run for a month.

The next section covers ‘Biotech and Cybernetics’ – everything from replacement limbs to second-chance near-death revitialisation techniques.

Because the Reticulans make for poor ground soldiers, they have invested huge amounts of resources to develop fighting robots to compensate for the loss of Human and Cicek thralls. This section (two pages long) has a nice range of fighting robots to suit every need, with full CE stats. A thought that did occur to me when reading through this section, was that if the Reticulans make excellent strategists but poor ground tacticians, how would they inject the tactical ability into the robots which would make up for the Reticulans shortfall? I can only assume because of the advanced AI that would be programmed into the robots and from situations learnt by commanding Human and Cicek thralls – this would give the robots the necessary tactical fighting capability.

The next three pages cover vehicles, everything from ‘War of the Worlds’ style tripods to floating transport orbs of varying sizes. Something that did make me smile, was the mention in such high-tech orbs, that the only item included besides the seat, was a fire extingusher! Seems slightly odd to have such a high-tech vehicle but includes a fire extingusher? Perhaps it would be in chrome rather than the standard red colour?

There aren’t just Orbs, but variants of flying saucers and other anti-grav vehicles(!)

The penultimate section covers Reticulan Psionics – you really don’t want to mess with one of these creatures as there are some quite powerful and ‘nasty’ powers they can inflict on victims. Inspiration has obviously been drawn from popular literature about the ‘grey aliens’, plus a few other surprises added!

The two appendices cover some replacement rules for ‘Critical Injury and Replacements’ and ‘Cyborb Conversions’. There are some really good ideas presented here, having a limb or major body replacement doesn’t necessarily there aren’t any disadvantages. In fact there is plenty that could go wrong and scope for developing character traits.

Overall, this is a really nicely written supplement, packed full of detail and distingishes itself by offering a number of technologies that are distinct enough from many other Traveller supplements to offer something ‘a bit different’. It is a highly-recommended supplement well worth picking up, which can be used not just for TSAO but for any other sci-fi RPG game. I would also like to thank for Omer Golan-Joel for generously sending me a copy to review.

Whatever you may be doing this summer, may your starport transits be bureaucracy-free and visits to the beach under multiple-suns be pleasant!