Posted on December 28, 2016 by AlegisDownport

The third in my big blog posts for this Christmas holiday is a review of the Stellagama Publishing book ‘The Space Patrol’, a supplement for the Cepheus Engine 2D6 sci-fi gaming rules. It can be purchased from Drivethru RPG for a currently discounted price of $8.39 (normal price $11.99) as a watermarked PDF containing 102 pages.

Various forms of law breaking can take place, depending how far you are away from the core worlds of any established space-faring empire / federation. The space navy is more concerned with the larger issues of maintaining security such as defending against planetary invasions or large-scale pirate attacks. So day-to-day law enforcement falls to the Space Patrol; they deal with criminals, investigations, chasing down perpetrators and crime prevention. Local law enforcement is managed by planetary law agencies, the Space Patrol works with them with what happens in between worlds, within their area of jurisdiction.

In some ways, members of the Space Patrol could be considered to be the ‘Paladins’ of the space ways (without the religious element); they have to have a great deal of integrity, self-sufficiency, high morals and professionalism as they spend a great deal of time on their own or in small teams.

The book (written by Richard Hazelwood and edited by Omer Golan-Joel, Josh Peters and Kathy Hazelwood) and begins by looking at the Space Patrol with a short introduction and overview of the book and any required materials. The next seven pages then describe the history of the organisation and its mission; this is where the book really hits the ground running with an extensive description of the different types of law and how this fits within the Space Patrol’s mandate. This doesn’t just cover space-related law, the difference between public and private law is described with everything from commercial law to major crimes are detailed. I think this is an important aspect and most definitely worth covering to the extent that the book does; It may seem boring, but by making good use of the different types of law, the referee can set up scenario’s that cover end-to-end an event that Space Patrol characters get involved with, to the evidence-gathering,  investigation process and finally judgement. 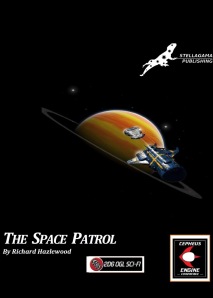 I mentioned earlier that Space Patrol characters have to have high morals and absolute integrity; it would be all too tempting to capture a bunch of criminals with their ill-gotten gains in the depths of space and hide all the cash on some remote asteroid for collection at a later date. The space patrol deals with this situation with the ‘Prize Money’ aspect. This is awarded to its crews based upon the value of the confiscated items, as a percentage. The Navy takes a dim view of this, but its a system that works for the Space Patrol.

Mentioning the Navy, there is some overlap with the Space Patrol and more often than not, their paths will cross and they will have to work together to enforce the law. This is covered in the ‘Jurisdiction’ section, which then leads nicely into the part which covers ‘Interstellar Law Enforcement’. A planets UWP is used to build some rules around its legal characteristics which finishes with how sentencing is handled.

Once you suspect criminal activity is taking place, how do you go about investigating it? The book describes how to obtain a search warrant and gather evidence. Again, this is extensively described – and if you are successful in getting the crim into court, the book covers the types of trials and the results (sentencing) that can form the outcome. Because the process can get a little complicated, you have a useful example which walks you through the procedure.

The next section looks at the Space Patrol Organisation and career development, building on the careers that are available in the Cepheus Engine rules. You are taken through the career development, ranks, commissions, awards and mustering out. You also get a couple of tables with the service skills that can be gained.

You also have some advanced career options with the introduction of two new concepts: gaining allies or enemies. These are either friends who could help the character at some point or people who could hinder the character. You don’t get one of these with every option on the survival or event tables, but there is enough chance you’ll pick one or the other along the way which the referee can use to challenge player characters at a later date.

The Space Patrol isn’t much of an organisation that lives up to its name, without spacecraft. The next section describes the range of TL12+ ships that the Patrol usually uses (a total of ten are detailed) along with three of these with colour illustrations by Ian Stead and their associated deck plans. Continuing the equipment theme, you get a detailed breakdown of what standard equipment the patrol has in its disposal; kit such as the specialist Vacc suits the patrol uses, battle dress and combat armour. The Patrol’s ships are limited by Imperium edict in that they can’t exceed 2000dTons in size, so as not to entrench on the Navy. The Patrol has a large number of wide ranging powers, some of which could be more powerful than the Navy, so they have to be kept in check somehow.

Now that you have the legal and technical aspects of the Patrol, you are then presented with a section on Space Patrol campaigns. The basic structure of having a Space Patrol is by having an interstellar empire behind it. However you get a list of variations on this structure so you have the most flexible approach available for whatever your current ‘universe’ is like.

The penultimate section is pretty extensive (22 pages) detailing a number of Space Patrol non-player characters ranging from senior figures in the Space Patrol; investigation NPCs, officers and an inspection team and ship crew members. You also get the stats for six of the most wanted criminals in the subsector – there are some very nasty pieces of work presented here who would be more than a challenge for Space Patrol player characters. The final section details eight adventure seeds (roughly one per page, so you get a lot of detail) to help get the referee started.

Whilst reading the book, it reminded me of a number of paintings that the great sci-fi artist Peter Elson produced, which were featured in some of the Terran Trade Authority Handbooks (TTA): I’ve linked (but not copied) these which may be helpful in some visual inspiration when reading the book. I hope you find them useful!

Pirates of the Asteroids

Trader to the Stars

The Rim of Space

This is a really comprehensive and detailed book on an important service in an established interstellar empire. Though the book is light on illustrations (there are pieces by Ian Stead, Axel Lofving, Luigi Castellani plus some from fotosearch stock photography) you get a very well written book that clearly presents each aspect of the Space Patrol and how the organisation operates. It’s interesting to read but detailed enough without getting too heavy (especially on the legal stuff). This is a very useful supplement that can be used in a number of backgrounds and is flexible enough to suit a number of tech levels – a highly recommended purchase for your RPG library! I would like to thank Omer Golan-Joel for kindly sending me a copy of The Space Patrol to review.

8 Responses to The Space Patrol Review