Posted on November 4, 2016 by AlegisDownport

The past week or so has seen the launch of two new Cepheus-engine / OGL compatible gaming aids; the first from Gypsy Knights Games; ‘Wendy’s Guide to the Fleets of Hub Subsector’, which describes fleet and naval backgrounds of the Clement Sector. Secondly, there is the ‘Space Patrol’, published by Stellagama Publishing. They will be both reviewed here soon! That’s the news, so lets jump into the review…

Second in the ‘Ships of the Clement Sector 13-15 – Escort and Support’ collection, the Boyne-class Replenishment Ship is also available on Drivethru RPG as a single PDF for $4.99. Using the OGL / 2D6 Cepheus-Engine rules, it describes a 1000dT starship originally developed for the Royal Navy to support their fighting ships and became a successful export in its own right. It’s a very nice design; Ian Stead who has provided the starship artwork, has provided plenty of highly detailed illustrations. It’s a ship that looks the part and can more than hold its own with a total of ten hard points mixing offensive weaponry such as beam lasers and missile launchers, with sand caster defensive weaponry.

A number of nations bought the Boyne-class, despite some shortcomings which became apparent later in its service life, due to its size. Having the ability to scoop for fuel, it is supported by two transfer launches and two modular cutters. You get ship specifications and deck plans for both small craft. 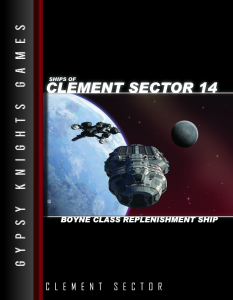 The book itself is 38 pages long and follows the same format as previous ‘Ships of the Clement Sector’ where it is divided into a situational commentary, introduction and how the ship came about, deck breakdown and deck plans (by the author, Michael Johnson) for the Boyne-class and service vehicles. There is plenty of artwork by Ian Stead and additional material by Bradley Warnes. There are some NPC stats for a military officer and six useful adventure seeds. However, you just don’t get the Boyne-class, which could limit the books usefulness, you also get the details of the commercial version of the ship – the Aranui-class.

The main differences between the Boyne-class and Aranui-class are a reduction in the amount of armament and the refitting of some parts of the ship as cargo holds. This bumps up the total cargo capacity to over five hundred tons – a substantial carrying capacity. There are five pages covering the the Aranui’s specifications including deck plans. The final main section describes a crew that operates an Aranui-class in the Clement sector, the merchant ‘Eveline’ commanded by captain Roxanna Trace. You get six pages describing four members of the crew (some useful NPC-stats here) and background to the merchant vessel, such as the trade route they take across the Clement Sector. To round off the book, you get another page with six more adventure seeds geared towards the Aranui-class.

Overall, this is a really nicely detailed book on a very useful spacecraft. The Boyne / Aranui-class is definitely something that the players could aspire to owning and having a 510 ton cargo capacity, there is plenty of room for long (profitable?) shipping runs – definitely a useful addition to your Clement Sector collection! My many thanks to John Watts of Gypsy Knights Games for kindly sending me a copy to review.