Posted on October 25, 2016 by AlegisDownport

Catching up with some Gypsy Knights Games products, I’m going to take a look at ‘Ships of the Clement Sector 13 – Strikemaster Class Brig’ in todays post. Available on Drivethru RPG for $4.99 as a watermarked PDF, it is a 24 page supplement detailing a specific spacecraft set in GKG’s sci-fi setting ‘Clement Sector’. It can also be used with the OGL Cepheus-Engine 2D6 set of rules. The ship is also available in softback book format as part of the SOCS13-15 Escort and Support compilation for $24.99.

The book follows the now-familiar GKG format of a few pages of a descriptive background / situation related to the ship featured, background to how the ship type came into being and specifications. You then get a breakdown of the ships decks and structure, along with game statistics and service vehicles. There are plenty of deck plans by Michael Johnson (who is also the author), topped off with copious colour and monochrome illustrations by Ian Stead and Bradley Warnes. In addition, you get an NPC’s details and a page of adventure seeds, which can be randomly determined by a D6. 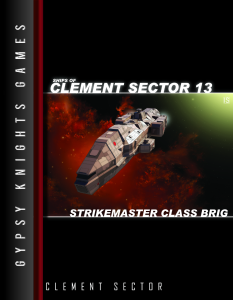 The Strikemaster is one of the most common military ships in the Clement Sector, typically finding itself on escort duties, anti-piracy or working in pairs extending a fleets sensor range by relaying information. You could see it as a interstellar-capable version of the System Defence Boat (SDB), equipped with four hardpoints featuring a variety of weaponry such as a particle-beam barbette, beam lasers, missile racks or sand casters. It has the useful ability to make planetary landings as it is a streamlined ship, or scoop fuel from gas giants. It’s a 400dT design which has the capacity to carry one ships boat, the details of which are also provided in the book. There are some excellent illustrations, including one by Ian Stead of three Strikemasters in close orbit above a planet, it reminds me of a shot from the film ‘Starship Troopers’ during the planetary invasion of the bugs world Klendathu. There are also various side view designs showing variations on the decals.

The ship is a nice solid design, nothing that you would call unusual but then again a good, solid, reliable specification is what the USSN (United States Space Navy) requirement called for. In some ways I came to a similar conclusion about the book, its not an unusual design but there is plenty of good quality content and the ship is something that would fit quite nicely into more than one adventure or campaign. Definitely another good quality product from Gypsy Knights Games worth picking up. I’d like to thank John Watts of Gypsy Knights Games for kindly sending me a copy of the book to review.