Combining the Some Quick Worlds

Posted on January 2, 2012 by AlegisDownport

First of all, Happy New Year to all Traveller’s and visitors to this site!

For this blog posting, I want to take a different approach to reviewing some of the latest Gypsy Knights Games products. Due to real life stuff going on, I’ve fallen a little behind with my latest reviews, so by combining several product ‘reviews’ into one posting I can give the reader an idea of the product content and some ideas how to use the books.

The first two books I’m going to start with are QW15 Vasynov and QW16 Serapis. The books both have attractive colour covers and are 14 and 16 pages in length. They are available from Drivethru RPG for $3.99 each as watermarked PDF’s.

The third book which I want to add to the mix, ‘Tal’ Kalares’ can be found on Drivethru RPG for the same price at QW17 Tal’ Kalares. However, the book is much longer at 22 pages; even at this price all the books offer great value. 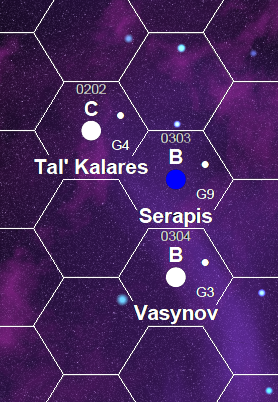 A suggested sector map when running the adventures below. Map generated from Travellermap POST form, background generated by me using POV-Ray and some custom scripts.

A quick summary of Vasynov:

Vasynov is a geologically violent world, part of a system of icy, rocky planets that are of great interest to mining companies. Visitors to the world will note its dry, arid and mountainous features with wind a constant feature. Trade with its 4 million inhabitants can be interesting as items previously considered as illegal, on the next visit could be perfectly legal due to the way the participating democracy works. This includes some forms of narcotics, so Traveller’s who trade on the other side of the law may find opportunities on Yasynov.

This is more temperate world, with about the same number of inhabitants as Yasynov. It is however, ruled by an eccentric dictator named Harlan Grant. Initially a popular figure, Grant now rules with an iron fist and it is not unknown for transgressors of the law to be sentenced very quickly; some even ending up on the prison planet of Sinope, which can be found around 8AU away from Serapis. Due to the way that women are treated on Serapis, marriage is controlled to a certain extent by the government and it is not unknown for men to take several wives.

In comparison to previous Quick Worlds books, the book does feature a replacement planetary system map format, which I find much clearer to use.

The world is dominated by its unusual geological features which are a mystery as to how they were formed. The landmass is divided into upper and lower regions, the latter being the more interesting for adventurers. A recent discovery of a number of ancient artifacts of unknown origin has created a sort of ‘gold rush’ where adventurers and the planetary research teams are looking for more, but none have been discovered so far.

The book is illustrated with colour scenes of the world, along with statistics of some of the creatures that can be found in the lower regions of Tal’ Kalares. The additional colour system map has been joined by the original format system map, this now forms the format used by future Quick Worlds books.

Adventure 1: Whilst visiting Vasynov, the party is approached by a patron who has evidence of the possible location for ancient artifacts (aka ‘tools’), which can be found on the world of Tal’ Kalares. The tool is reputed to produce water from the surrounding rock and dirt and considering that Vasynov is a ‘dry’ world, the patron will pay handsomely for the players involvement in it’s find. The players will be hired to mount an expedition to Tal’ Kalares and track down the tool. Obviously, a number of animal encounters can be used to impede the players progress (an extensive table of encounters is provided in the book). It should be noted that rival companies and individuals from Vasynov, also aware of the ‘magic water tool’ will also be attempting to impede the players progress at every opportunity. Whoever possesses the tool, will become very, very rich…

Adventure 2: Vasynov’s volcanism is going into overdrive and the planet’s super volcano is about to erupt. The party is contacted whilst out in deep space and is asked by the government to take a number of its inhabitants off-world and to safety. A representative from the government asks that the party takes the women first and for them to return for the menfolk as soon as possible. However, the reality is that the government of Vasynov has been infiltrated by an agent from Serapis. The government of Serapis simply needs more women; because of the way the government endorses men marrying multiple times, the female population is being depleted and the Serapis agent wants to direct the female refugees from Vasynov to Serapis, to bolster the female population.

Adventure 3: The government of Tal’ Kalares needs the help of the players to help ‘influence’ the latest public vote on Vasynov. The water dragon narcotic, currently illegal on the world, needs to be made legal again. There is a current illegal trade between the two worlds which demand on Tal’ Kalares is outstripping supply. Making the drug legal on Vasynov will help improve the supply lines to Tal’ Kalares, even though it will remain publically illegal. It should be noted that influential people in government are endorsing this change on Vasynov, but if the plot is exposed, it will be denied by the government of Tal’ Kalares.

The players will be asked to arrange that the electronic voting results have a positive outcome for the legalisation of water dragon. Characters with good electronic and computer skills will be beneficial. The job will involve breaking into a government building on Vasynov and connecting a specially adapted terminal (supplied by the patron representing the Tal’ Kalares ‘client’) to access the voting results computers. Obviously security will be extremely tight and the target is located down several levels of the building. Once the terminal upload is complete, the players will need to get out without leaving a trace of the break-in or evidence of accessing the voting results computers.

A successful escape and expected result in the voting results will give the players a handsome pay-out from the patron.

Overall Conclusion:
I like these three books, especially Tal’ Kalares, which at the time of writing has now become a firm favourite. I like the addition of the encounter tables and a couple extra colour graphics help to increase the overall ‘value’ felt when purchasing the product. There are a great number of adventure seeds to be gained from the book and the introduction of an unknown alien ‘element’ to the background adds to the mystery. All recommended purchases and I hope the ideas above are of use!

In my next posting, I’ll be looking at the latest Quick Worlds releases!

1 Response to Combining the Some Quick Worlds